“God grant me the serenity to accept the things I cannot change, courage to change the things I can, and wisdom to know the difference.” – The Serenity Prayer (Reinhold Niebuhr)

Perhaps you know of someone who considers that most things that happen are caused by chance. Or they seem to accept that whatever significant events occur in their life, it was fate or luck that determined the outcome. 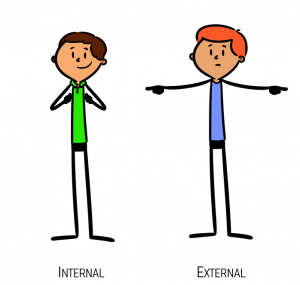 On the other hand, some people clearly believe that they control their own destiny. Their belief is that whatever happens to them is mostly due to the choices they make or the actions they take.

These disparate belief systems represent opposite ends of a continuum that social scientists refer to as Locus of Control. A person’s Locus of Control is where someone places the primary causation of events in his life. Those who believe their life is largely controlled by outside forces (externals) are on one end of the spectrum. Those who believe they control their own lives (internals) are on the other end of the spectrum.

Locus of Control is a psychological construct. This simply means that it is an instrument that can be used to describe a group of attitudes or behaviors.

Julian Rotter is credited with introducing the concept of Locus of Control. He based much of his research on the work of Albert Bandura, who developed social learning theory. In his seminal paper published in 1966, Rotter explains that people can interpret events as being either a result of one’s own actions or external factors. Rotter developed a scale to assess whether a person has a tendency to think that situations and events are under their own control (internal influences) or under the control of someone or something beyond their control (external influences).

Listed below are a few of the paired statements from the original Rotter Internal-External Locus of Control Scale:

1a. Becoming a success is a matter of hard work; luck has little or nothing to do with it.
1b. Getting a good job depends mainly on being in the right place at the right time.

2a. Many of the unhappy things in people’s lives are partly due to bad luck.
2b. People’s misfortunes result from the mistakes they make.

3a. One of the major reasons why we have wars is because people don’t take enough interest in politics.
3b. There will always be wars, no matter how hard people try to prevent them.

5a. Many times I feel that I have little influence over the things that happen to me.
5b. It is impossible for me to believe that chance or luck plays an important role in my life.

4a. In the long run, people get the respect they deserve in this world.
4b. An individual’s worth often passes unrecognized no matter how hard he tries.

Since Rotter’s original work, many other researchers have studied Locus of Control, often seeking to determine if it can be used to predict outcomes in more targeted domains. Here are a few examples of Locus of Control scales that were developed for specific purposes:

John Jones and Lisa Wuebker co-developed the Safety Locus of Control Scale. Let’s describe some of their research and summarize the important findings.

One hundred and forty-three persons participated in the study. All subjects anonymously completed the Safety Locus of Control Scale which included statements like those in the table below. A six-point Likert-type scale (ranging from “Agree Very Much” to “Disagree Very Much”) was used for rating each item.

In addition, all subjects completed a questionnaire which required a description of their personal histories of accidents and injuries for the preceding six months. Before scoring the safety scale, subjects were placed in the following five criterion groups based on a thorough analysis of their accident questionnaires. 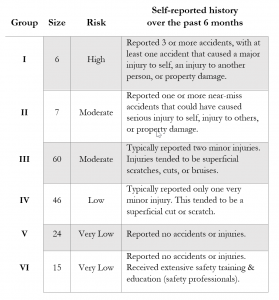 A strong relationship was established between the safety scale groupings and the accident groupings. These results are summarized in the bar chart below. 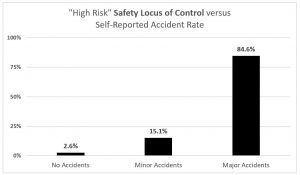 Jones and Wuebker subsequently followed their initial study with one that examined the safety attitudes of hospital workers. The Safety Locus of Control scale was assessed for the ability to predict employment applicants’ propensity for on-the-job accidents. The researchers concluded that hospital employees with more external safety locus of control orientations reported significantly more occupational accidents (as well as more severe and costly injuries) compared to workers with more internal safety attitudes. The results from this study further validated the Safety Locus of Control scale.

Other researchers have reached similar conclusions about the relationship between safety locus of control and safety performance. [In one study, farmers who had a more internal locus of control were also assessed as being more likely to have working styles that promoted safety].

Can anything be done about employees who have a strong internal locus of control for safety?  Or do we simply hope that they don’t get hurt because of their internal belief system? 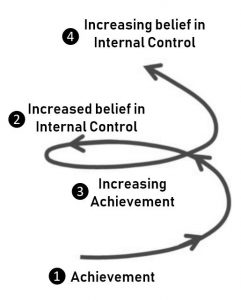 Fortunately, there are actions we can take to nudge these folks toward believing that working safely is within their control. For example, Russ Hill describes a specific method for teaching internal control.  He advocates an approach that he calls the Personal Achievement StrategyTM. It is built upon the hypothesis (supported by other researchers) that there is an interactive relationship between achievement and internality.

One of the things that leaders can do to get people started on the upward spiral for safety achievement is to get them to experience “small wins”.  Sometimes we need to be reminded of how successful we have been to feel good about it and to believe that we can be even better. I witnessed how one leader leveraged this idea as a means for changing the beliefs of his crew from externality towards internality in terms of safety.

Steve was an area maintenance supervisor whose crew had gone 180 days without a recordable injury.  This was truly a milestone for this group.  The previous longest time between recordables had been 85 days.  Steve planned a little recognition ceremony for the crew before they started their day.  I happened to be in the facility, and Steve invited me to attend the celebration. It was memorable.

As he circulated among the craftsmen on the shop floor, he handed out small pocket knives and thanked them for their safety efforts over the past six months.  And then he said something that got everyone’s attention. It was provocative.

“You know what they are saying out there in the plant?” Steve asked the group as he finished handing out the knives. “They are saying that the only reason we have gone six months without an injury is that we are lucky. Well, I want to know, are we just lucky?”

Silence. You could have heard a cotter pin drop.

Then one of the older guys standing in the back spoke up. “H*** no, it ain’t luck!” he growled. You could see the veins in his neck stand out as he gritted his teeth.

Someone else chimed in.  “Who says we are just lucky?  They don’t know all of the things we have done to get this safety record!”

Steve got the reaction he had hoped for. “So, if it’s not luck, then how did we achieve this safety milestone?” he asked no one in particular.

The discussion dam burst.  One by one, different guys offered up specific actions that they had taken to reduce their risk of getting hurt:

“We used to just blow off that pre-job checklist, but now we talk about it and check out all the potential hazards…”

“I know we are watching out for each other more.  Just the other day…”

“No more shortcuts, that’s what I see.  We used to just get ‘er done and didn’t think about…”

“That’s right,” Steve said. “We are doing all those things.  And I want you to recognize that we didn’t get here by luck.  We got here because you guys are doing the right things to increase your safety awareness.  You are watching out for one another.  You are working smarter when it comes to safety. And I’m proud of all of you.  But we can do better.  We had some near misses.  The alligators are still out there waiting to bite us.  So what else can we do to keep our injury-free streak going?”

It was a simple but eloquent way to get these guys to “connect the dots.”  If you do these things, you get this outcome.  It’s not luck or fate.  It’s deliberate and diligent actions. Steve was driving the spiral upward by reinforcing the relationship between effort and achievement.

What else can we do?

Here are some additional actions that you can take to address the safety mindset of ‘externals’ in your organization:

Use Locus of Control questions as an employment screen. There are likely some equal employment and diversity considerations that human resource professionals will have to navigate before including these questions on any pre-employment test.  However if you want to improve the quality of your new employees, it makes sense to screen out candidates who have a strong external safety locus of control.  The research clearly shows that these employees are much more likely to be injured.

Survey employees to measure the opportunity. The higher the percentage of employees who are not confident in working injury free, the less likely your organization will achieve its safety goals.  My research suggests that about 15% of hourly manufacturing employees are not confident in working without getting injured.  A surprising number of employees have a strong external locus of control when it comes to their belief in whether or not they will get hurt.  In other words, 15 persons out of 100 believe that if they get hurt, it will be because of fate or chance. (And the reverse is true.  If they are not injured, they will explain their good fortune as being lucky).

Set short-term safety goals. Even employees with a strong external safety locus of control can be influenced to think differently if they understand the relationship between achievement and outcome. Can we go one month without injury? How about two months?  Then recognize these small wins.  Don’t wait to go six months or a year before you celebrate, even in a small way. Winning (working safely for a short time) promotes more winning (working safely for a longer time) and builds confidence.

The Locus of Control Construct’s Various Means of Measurement:A researcher’s guide to some of the more commonly used Locus of Control scales. Russ Hill. Will To Power Press. 2011. ISBN 978-0-9833464-3-2

Safety locus of control as a predictor of industrial accidents and injuries. Lisa J. Wuebker. Journal of Business and Psychology,1986, Volume 1, Number 1.