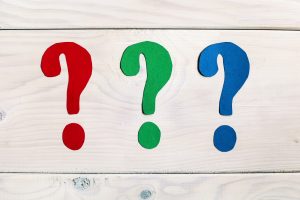 The strategy of asking by using humble inquiry is especially critical for facilitating an effective safety conversation. Many safety conversations that are initiated by people in authority are missing this key attribute. Unless you are willing to ask questions from a basis of genuine care for the employee, you will not build trust.

Figure 1 depicts a model of a common management strategy where we do more telling than asking.  It is primarily task-oriented.

What is your principal motive for having a conversation?  For supervisors who align with this management strategy, their motivation is often driven by the need to maintain or exert control.  Often the primary goal of these conversations is to accomplish a task, with a secondary goal of getting the job done while being compliant (to procedures, rules, standards, or policies).

A supervisor often defaults to a “telling” strategy simply because he or she has authority.  Directions are given via work instructions.  Expectations are set in terms of specific job duties and outcomes.  Progress is monitored by the amount of work that is being accomplished and the quality of the output. Feedback is given in the form of corrections to any work behaviors. Modifications are made to the process as needed.  Finally, productivity is measured and checks are performed to see if compliance (to safety or quality standards) was achieved.

The entire cycle is repeated for the next series of tasks.  Success is measured by work output and the absence of any deviations from standard. (Productivity was acceptable. Quality was achieved. No one was injured).

Anyone with authority can successfully use this strategy if their primary goal is to accomplish tasks.  However, it has severe limitations if you need to build relationships or trust.  The reason: conversations that occur throughout this cycle are mostly directive.

This approach is especially deficient when it comes to safety conversations – where the primary objectives are to encourage open discussion and increase engagement.  Let’s take a look at a strategy that is designed for relationship and trust building.

Figure 2 depicts a model of a leadership strategy where we do more asking than telling.  It is primarily person-oriented.

Leaders who start with a “why” of caring tend to use this strategy.  They have conversations because they genuinely care about their employees.  Their primary goal is to build trust and increase engagement.  In this case, task accomplishment is a secondary goal.  (They understand that if the right kinds of relationships are developed, the work will be safely and successfully completed by engaged and committed employees).

The leader who uses this strategy leverages the concept of humble inquiry to frame the conversation.

Several examples of humble inquiry are provided in Step One of the Five-Step Guide to a Safety Conversation discussed in a previous article.  They include sincere questions such as

…it goes beyond just overt questioning.  The kind of inquiry I am talking about derives from an attitude of interest, caring, and curiosity.  It implies that [we are willing to make ourselves] vulnerable.

The kind of humility that is crucial for the understanding of humble inquiry is “here-and-now humility.”  This is how I feel when I am dependent on you.  My status is inferior to yours at this moment because you know something or can do something that I need in order to accomplish some task.

If I feel I have something to learn from you or want to hear some of your experiences because I care for you, or need you to accomplish a task, this makes me temporarily dependent and vulnerable.  It is precisely my subordination that creates psychological safetyfor you and therefore increases the chances that you will tell me what I need to know.  If you exploit the situation or take advantage of me by giving me bad information, I will learn to avoid you in the future or punish you if I am your boss.  If you tell me what I need to know and help me, we have begun to build a positive relationship.

The leader’s motive of caring and his sincere humble inquiry sets the stage for a relationship that can be built upon trust and mutual respect.  One conversation won’t get you there, of course.  However, it starts a healthy process that includes active listening and shared commitments between the supervisor and the employee.

The key measures of success for this strategy are how much learning is taking place and the degree that employees are engaged.  One indicator of engagement is the extent of collaboration on any improvement ideas that emerge.

As illustrated in Figure 2, each personal conversation that is motivated by caring and framed with humble inquiry contributes to a virtuous cycle of learning and improvement. Productivity is not the primary goal of this communication strategy. Ironically, the quantity and quality of work almost always improve with the resulting positive relationships, trust, learning, and engagement.

Humble inquiry is used frequently by those who practice servant leadership.  Asking your employees these kinds of questions sends a strong signal that you care about them.  There is a strong inference that, “If you help me, then I can help you.”  And helping each other is a key building block of a trusting relationship.

Most of us spend more time telling than asking.  While it may be appropriate to mostly “tell” in certain situations, telling does nothing to foster positive relationships or build trust.

When engaged in a safety conversation, it is critical to do more asking than telling.

By using humble inquiry as our approach, we become temporarily dependent because we want to learn something or the other person can do something that we need.  We also become vulnerable.  (We can be taken advantage of, ignored, or given bad advice).  But this vulnerability or self-exposure also makes the relationship more personal.  It shows the other person that you are willing to invest a part of you to develop the relationship.  This is how we start to build trust.  And trust is essential if we seek collaboration and commitment.

The next time you engage in a personal conversation, consider what you want to achieve.  If you want to go beyond getting a task accomplished and develop a relationship built on trust, choose the right approach.

Asking (through humble inquiry) is superior to telling.