Greg wasn’t motivated to attend college, but was fortunate to find employment at a local auto parts manufacturer in town.  It paid a good hourly wage and allowed him to pursue his passion of motorcycle racing. He also set up a small repair shop for motorcycles.  When he was not working at the plant, he would retrofit bikes and experiment with various frame and engine designs.

Shortly after he started his job, Greg noticed that his work cell was getting bins of parts that were being rejected by the next process area.  He noted that most of the time a hole was not deep enough to accept a pin that was used to lock the pieces in place.  After seeing the problem, Greg decided that he could machine a small jig that could be used to make sure that the hole would always be drilled to the correct depth.  He made up a pilot jig in his shop and brought it in the next day.  After processing some parts, he decided that it was an improvement over the current set-up, but not quite good enough.  Greg made some minor modifications in his shop and tried it again the following day. It worked great.  For the next several days, there were almost no rejects in his work cell for incorrect hole depth.

At the end of the week, Greg came in to work to find a note on his time card from Charlie, his supervisor, to see him before his shift.

Greg poked his head in the door.  “You wanted to see me?” he asked.

Greg sat down in front of the desk, placing his lunch cooler on his lap and wondering what this could be about.

“Do you want to tell me what this is?” Charlie asked, as he pulled the custom-made jig from under a pile of papers  and slid it across the desk.

Greg’s face brightened as he recognized the custom-made jig.

“Sure,” Greg said, with some pride in his voice.  “I made it in my bike shop.  It fits on the drill press and we can use it on certain parts to make sure we always get the right depth of hole.  I saw that we were getting rejected parts and figured this would be a simple way to fix the problem.  It works great!”

“Well, you sure got the boys in engineering upset,” Charlie quickly retorted.

“How’s that?” Greg asked.  He was feeling confused and a little uneasy.

“Out of the blue, the Engineering Manager showed up at my door last night and wanted to know why my people can’t follow simple work instructions.  Then he handed me this.”  Charlie pointed a finger at the jig laying in front of Greg.

“Look, kid.  We have standards for everything we do.  You know that.  I’m sure this was covered in your orientation training.  Under no circumstances is anyone to change any part of the process without getting the proper signoff’s.  These start with my approval.  You just decided that you knew how to get something done better than the way it was designed…?”

Greg was stunned.  He couldn’t believe what he was hearing.

Charlie’s face was turning red as he spoke. His voice started to climb in volume as he leaned forward in his chair, placing his elbows on the desk. 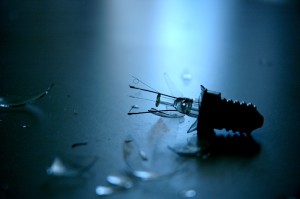 “Just in case this point wasn’t clear to you before, let me say  it again.  You will perform the job the way we teach you to do it and the way it is documented in the manual.  If you have any harebrained ideas like this again, check with me first before you do anything.  Got it?”

Greg’s confusion transformed into anger.  But, he held his tongue and answered through clenched teeth, “Yeah, I got it.”

As he shuffled out of the office and toward the locker room, Greg made a silent vow that he would never offer any suggestions for improvement.  “After all, if they want me to check my brain at the door, I will do that….and save my ideas for the bike shop.”

Our words and actions can squelch the ideas and initiatives of those who want to make improvements.  In this story, Charlie represents a classic “waste of intellect”, one of the eight classic sources of waste.  Until something changes so that the entire management team values suggestions from Greg or his co-workers, this process will remain stagnant.  Continuous improvement and learning cannot survive in this climate.

Think about how we encourage our children, even at a very early age.  When they are first learning to walk, we cheer and celebrate aloud when they successfully take their first step.  But we don’t chastise them when they wobble and fall.  Instead, we pick them up and encourage them to try to take another step.  We recognize that the child’s success depends upon their willingness to take risks – and that we need to assure them it is “safe” to fail.

David Kelley, founder of IDEO, uses several tenets to guide his team as they seek to generate creative solutions for their clients.  Here are two of them:

It is helpful to assess your organization’s openness for risk-taking, with the goal of learning and continuous improvement. (To be clear, the risk I am referring to in this context is NOT the personal risk associated with unsafe behaviors).

How often do you observe the following in your organization – on a scale from “almost never” to “frequently” ?

If you answered “almost never” to most of these, your organization is destined for a future of mediocrity.

One Fortune 500 company represents a classic story of growth through successive failures.  3M Company began as a failed mine. Today it is acknowledged to be one of the most innovative companies in history.  One of the principal reasons for this success was that employees were given 15% of their time to try just about anything.  An early CEO was quoted as saying, “Our company has, indeed, stumbled on to some of its new products. But never forget that you can stumble only if you’re moving.”

What are you doing to encourage the right kind of risk-taking?