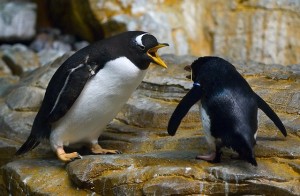 Observing two people who are arguing can be fascinating.  I’m not talking about a discussion or a debate – but a genuine argument.  If both persons hold widely different perspectives and the conversation devolves into arguing, reason and common sense become secondary.  Emotions take over.  Most times, the result is a stalemate.  Neither person leaves with any sense of satisfaction – and the issue remains unresolved.

One technique that improves the chances for a more positive outcome from a disagreement is the Ransberger Pivot. It is a communication principle that is used to find common ground with an opponent. It is defined as a debate technique (first described and utilized by Ray Ransberger and Marshall Fritz in 1982) in which a person attempts to find common ground with another person they are trying to persuade.  The proposed method deploys three stages:

How many times have you heard two people start arguing because one of them immediately took an opposing position and either implied or stated to the other person “You’re wrong” ?

By using the Ransberger Pivot, you are much more likely to have a productive discussion, rather than just arguing opposing views.  The key is to validate the other person’s feelings and to seek common ground BEFORE proposing a solution to the issue.

This approach may be one way to persuade a key opinion leader who has a strong opposing view.  It can be more effective than trying to convince this person by stating the obvious facts that support your position of being “right”.

Of course, the words you choose are critically important as well.  You may believe that you are saying something very clearly, but the intonation that you use can dramatically alter the meaning of your statement.  Bob Burg references an exercise that Zig Ziglar used that demonstrates how the way you say something can dramatically alter what you mean to say.  This exercise is described below.

Accentuate the one word in the sentences below which appears in bold-face text. Just put extra emphasis on that one word as you read out loud. Each sentence is exactly the same, but watch what happens when you place emphasis on the different words.

Aren’t the differences interesting? All because you merely accentuated a different word in the exact same sentence!

Another example of how the words we choose can be critical to not only the meaning but the potential outcome is embodied in this classic video about “The Power of Words”.

These examples underscore the aphorism that what we say and how we say it matters.  We can minimize the likelihood of arguing simply by being more thoughtful in our choice of words and how they are spoken.

Keep this in mind the next time you engage in a conversation where there is a strong opposing view.  It could make the difference between an unproductive argument and a healthy debate about solutions.

Winning Without Intimidation: How You Say It.  Bob Burg.  March 2005.  http://www.theatlasphere.com/columns/050311-burg-wowpartfour.php