Is there an undiscussable topic that is preventing your team from working well together or is causing you to avoid working on the things that matter most?  Then you may have an elephant in the room. 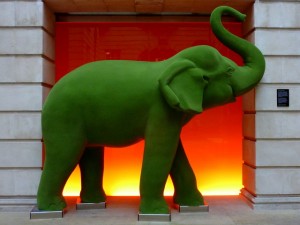 An elephant in the room is an obvious truth or condition that is being ignored or not addressed, or a risk nobody wants to discuss. Everyone knows these elephants exist – but we try to avoid them or refer to them obliquely.  They are often discussed privately either before or after meetings.  Our fear is that if we talk about these elephants, they will come to life and trample us.  The problem is that unless and until we are free to identify and discuss these sensitive topics openly, they never go away.

Let me share a personal example of how an undiscussable crippled an organization.  I once worked in a group where an elephant was in the room every day, during the morning operations meeting.  A new operations manager had been appointed.  It was clear that he had a directive, command & control style.  Any deviations from standard that were reported in the daily meeting resulted in a series of questions and assignments from the operations manager to “go find out why”.  The area supervisors found themselves constantly trying to explain every time that the process was not within normal operating limits.  Each day, they were required to report their findings, at which time a new series of questions prompted yet another set of investigations.

There was no learning going on here.  Instead, the daily mission devolved into “how can I provide a response with the least likelihood that I will be asked another question?”  The goal for everyone was to provide the bare minimum information during each report out.  Supervisors and managers conspired privately in advance of the meeting to get their stories straight, to make sure that there was alignment on each person’s explanations!  There was a huge elephant in the room wearing a placard that said, “Lack of Trust”.  Everyone but the operations manager saw it.  But no one had the courage to bring it up.

While this is an extreme case, there can be many topics or issues that might be considered undiscussable.  So how do we get these sensitive issues surfaced so they can be discussed?

In Leading at the Edge, Dennis Perkins describes a process that he has used to provide greater visibility to these topics. 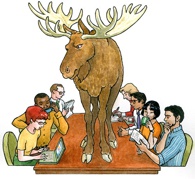 Instead of using an elephant, Perkins chose a moose on the table.  He envisioned the moose as a perfect metaphor ( a large, hairy, ungainly animal) to symbolize the issues being avoided by any group.  By placing it on a table, the moose blocks everyone in the room from communicating effectively.

Perkins outlines a method to identify all the moose. In this context, a moose is defined as a latent conflict that everybody knows about but nobody discusses. The process requires a trained facilitator, who leads the team to generate a confidential list of moose.  Obviously, there has to be a genuine desire from leadership on wanting to know what these undiscussable topics are and a commitment to address them once they are identified.  Perkins points out that not all moose are the same size or importance – so he proposes that each one is ranked on a scale from 1 (“mildly annoying”) to 10  (“extremely problematic”).  This process has the potential for the team to surface a lot of hidden issues and develop a plan to work on the issues together.

But isn’t there something we can do to make these elephants (or moose) more visible, rather than wait until they become a hindrance to the team?  It all starts with the leader, who needs to create an environment where trust and open communication is valued.

According to Lee Colan of The L Group, the goal for leaders is to create a climate that encourages risk-free identification of any undiscussable (elephant) that might have a negative impact. He advocates that the best approach for guarding against any invisible elephant in the room that could hinder your team from working well together is to agree to rules of engagement. These rules enable team members to say and do the right thing.

Rules of engagement should fit your team. They are developed and agreed upon by the team. Colan provides some examples:

Effective leaders keep their rules of engagement visible and apply them to all decisions. The team members also agree to hold each other accountable for always following the rules of engagement. This encourages and empowers the team to uphold the rules and point out elephants as they appear.

If you make a candid assessment of your working environment, would it reveal a number of large critters (elephants or moose) standing in the way of your team’s success?  As a leader, consider how to make it safe to discuss the sensitive issues that are represented by these metaphors.