Symbolism can be a powerful method to align an organization to a new way of thinking.  Transformational leaders know that everyone will be looking at what they say and do.  One of the basic tenets of effecting culture change is to create experiences that will reinforce the beliefs that you want people to hold.  These experiences can be small words of support, a well-written sincere note, or a key policy decision.  But they can also be bold acts that create a lasting impression and become the basis for stories and legends.  Consider the following symbolic acts – one in world politics and one in business.

The use of symbolism is not only within the purview of world political leaders or company executives. Creating experiences is only limited to your imagination and the thoughtful consideration of the message you want to send.

Here is a personal story where symbolism was used to send a visible and powerful message.

I was working at a manufacturing site for several years when a new leader was brought in to manage the facility.  While he was new to the site, almost all the managers and supervisors had been in their roles for at least 5 years – and many had been there for 15 years or longer.

Within the first week, the site manager (let’s call him Sam) held a meeting with the management team and commented that the housekeeping in general was deplorable.  He expressed his displeasure and commented that each manager should embark on an effort to clean up their area.  A week passed by.  Sam commented again that he had not seen any significant improvement and asked that the clean-up efforts be stepped up.  Another week passed by.

One Friday morning, as the managers were gathered for a daily production meeting, Sam entered the room and announced, “Folks, instead of our usual meeting, I want you to put on your safety gear and follow me.  We are going to take a tour.”  We looked at one another as we donned hard hats, ear plugs, and safety glasses.  Then we left as a group, with Sam in the lead. 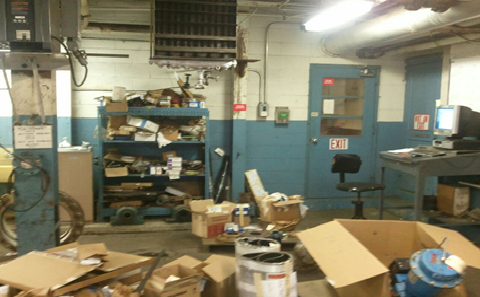 Sam led our group through the entire facility – and we didn’t just follow the usual pedestrian walk ways.  We visited basements, offices, shops, labs, control rooms, docks, road ways, and outside storage areas.  We even traveled to the roof.  Every 30 seconds or so Sam would stop and point at something.  Each time he stopped, Sam would simply point to items in the area upon which he had spray painted his initials in red.  Sometimes it was a pile of debris.  Sometimes it was a spare part.  Other times it was shelving filled with opened, unmarked boxes.  There were fans, pumps, bearings, motors, pulleys, rakes, buckets, blades, gloves, wire, bottles, drums, grease fittings, chairs, lamps, cables, ….  You get the idea.  The bright red graffiti brought all this disorganization out of the shadows and into the foreground.  It felt like we were seeing the letter ‘A’ in Hawthorne’s The Scarlet Letter.  The shame and guilt of the group were palpable.  How had we gotten to the point where we had accepted this work environment?

When we completed the tour and came back to the meeting room, Sam asked the group, “Any questions?”  There were none.

It was a painful experience for all of us.

Of course, we received the message loud and clear.  Over the ensuing weeks, the facility received a much-needed facelift.  In hindsight, it is easy to see now what we could not see then.  But it took a radical approach in bringing this to light.  We had become myopic and complacent.  Over time, we had accepted the unacceptable.

It should be no surprise that this organization went on to achieve improved levels of performance in safety and quality.  Poor housekeeping was just a symptom of the larger opportunity of low expectations and poor accountability.  Because Sam set a higher level of expectations (refer to an earlier post on this topic), everyone gained a renewed sense of purpose and direction that had been absent.

The next time you want to communicate something to your group that is critical, you can write a memo, send an email, call a meeting, host a conference call, etc.

Or, you can plan a memorable event, using symbolism that will be impactful and long-lasting.  What message do you need to send?